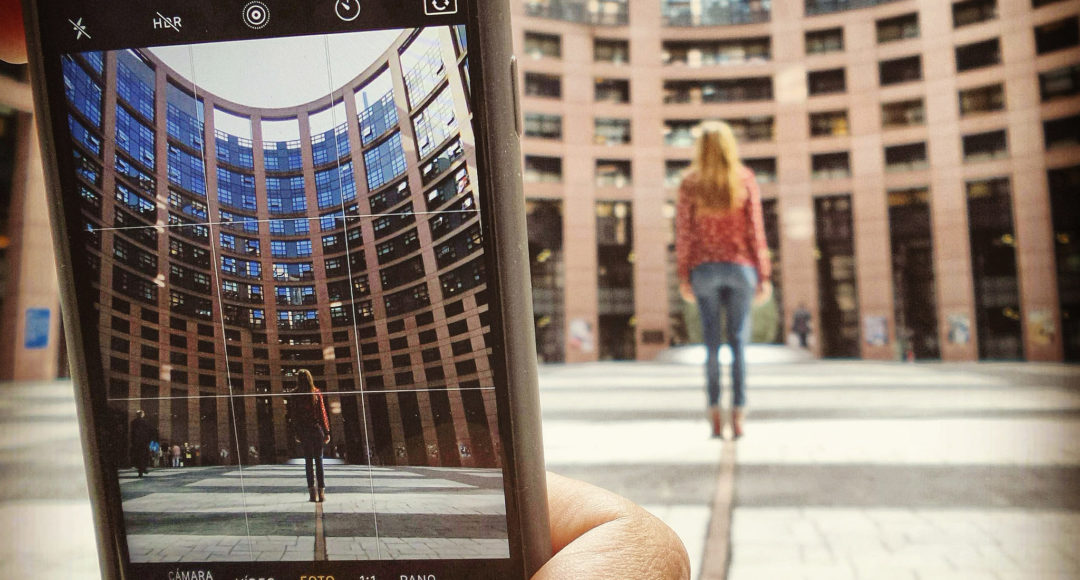 Who responds to messages when someone writes the European parliament on Facebook? Karolina Wozniak from Poland and her team. Europe as a topic is near and dear to her and communication is her passion.

“Dear European Parliament, the outcome of the referendum in the United Kingdom has affected me deeply. I am 19 years old and study. My Erasmus semester in France begins in August. For me, Europe is the freedom to travel. My boyfriend lives in Germany and my grandmother in Poland. My heart is in the EU. What should I do if the United Kingdom leaves the club? It was messages like these that Karolina Wozniak read on the morning after the Brexit referendum on June 24, 2016. “Tears came to my eyes when I saw these messages from so many young British,” says the 38-year-old Polish woman. She is the social media coordinator of the EU parliament. 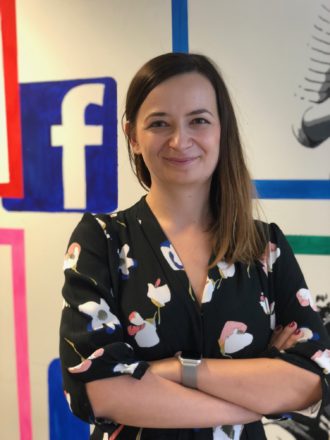 Wozniak and her team of around 20 employees respond daily to Europeans like the young and concerned British woman on social channels. They engage in conversations concerning Brexit, EU asylum policy or freedom of travel in Europe. Wozniak says that a major challenge was the refugee crisis and that they received a great deal of ugly and hurtful comments. The EU Parliament is active on over 15 platforms in total, including Facebook, YouTube, Instagram and Snapchat – some of which offering all 24 official EU languages.

Wozniak herself speaks English, French and Polish. Having such language skills was one of the reasons why she was able to write for a Polish newspaper about the accession negotiations with the EU after her graduation. She traveled to Brussels, became familiar with the EU institutions and listened attentively to the stories of the politicians traveling home in government planes. „Many young people were interested in the EU, but my interest was somehow unique,“ recalls the lively woman with dark, long hair. The cultures and languages of the other EU countries fascinated her. On the night of May 1, 2004, Poland joined the EU and Wozniak was out celebrating. Shortly before midnight, she left her party for the city center in Warsaw: “I wanted to be there when the European flag was hoisted in Piłsudski Square.“

Wozniak became a journalist and worked for various media outlets. Shortly after Poland’s accession, the EU was looking for employees from Poland. „I thought, why not, and took the EU assessment test.“ The competition is high. Many people try for years. Wozniak, however, succeeded on the first time. Sometime after, Stephen Clarke contacted her, who led the online editorial department of the European Parliament. Wozniak gathered her life in Poland and moved to Brussels – the city she already knew from the days of the EU negotiations.

“EU Geek,” Wozniak calls herself with a smile. “The EU and I, it is like a little love story,” she says. For her, having direct contact with people in Europe is what she particularly enjoys about social media. „We have the opportunity to close the gap between the Members of the European Parliament (MEP) and the citizens.“ Moreover, everyone can post their questions to the MEPs on the Facebook page. 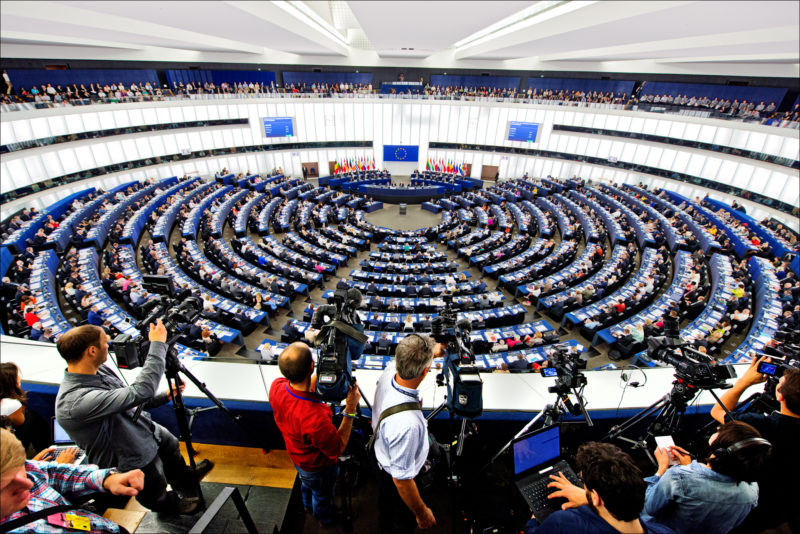 The European Parliament has been active on Facebook since 2009. “When I came on board in 2010, the Parliament had 150,000 followers,” says Wozniak. Today they have 2.5 million. The EU Parliament is using the platform as a way to inform people through posting pictures, videos and since over a year now, also live interviews on current MEP topics such as climate change, reforms on the common European asylum system or copyrights. With the live interviews, people can have direct contact with members of parliament and often get an immediate answer to their questions.

Wozniak also organizes contests for Facebook followers where she herself shows them the plenary hall and the corridors of the European Parliament in Strasbourg or Brussels. The winners are invited to the Parliament and sometimes even meet the President, Antonio Tajani. Here, they can ask him what they have always wanted to know. These are often powerful moments for the participants, says Wozniak: “The European Parliament should not be a black box for Europeans. Social media is a wonderful way to show them what it’s like and what is happening here.” 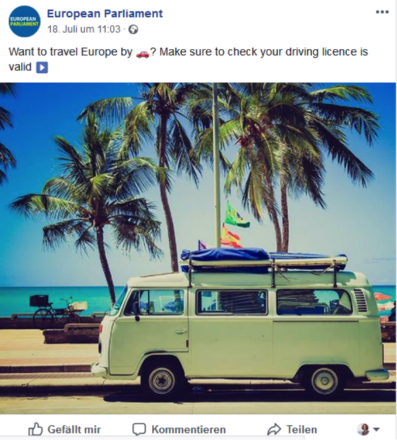 At the beginning of each week, Wozniak and her team select the current topics of Parliament and post them across various social media channels. „Posts for Instagram are sometimes different topics than for Facebook,“ explains Wozniak. On one platform it is a picture, on the other, a video. Content is adapted for the respective platform users. For example, sometimes there are posts about the EU exchange program „Erasmus Plus“ or the EU’s Interrail program that are only for younger Facebook followers.

Wozniak has also noticed that some topics resonate more with men than women. For example, men were more interested in Brexit and political issues whereas women often commented on climate change or environmental pollution. Wozniak keeps a close eye on these differences and deliberately tries to shed light on women who have shaped the EU. For example, on the 9th of July, there was a post about the „founding mothers“ of the EU. „Meet the EU founding mothers,“ said the video. Although the Facebook fan page is for Europeans of all ages, most fans are between 25 and 34 years old.

With the growing number of followers came more comments under the posts, and not just good ones, says Wozniak: „We’re trying to answer everyone, of course, but it’s not always possible.“ Over the years, the time an editor spent on moderating commentary increased. The comments have become increasingly „tougher“. If the EU Parliament would be described as a „joke“, that would be harmless. In the moderation guidelines, Parliament outlines exactly what can stay and what needs to go: comments that refer to Nazis, the Soviet Union, Hitler or Stalin will be deleted out of respect for the victims and veterans of the Second World War. In the guidelines it states: „We aim to respond to direct questions in a timely manner.“ Over time there have also been a number of followers who have answered questions from other followers.

In concrete terms, this is how it works for Wozniak’s team: there is always one team member responsible for a post on Facebook. This person writes a text, finds an image, video or GIF and presents the post to all team members for their input and edits. The person preparing the post then takes the responsibility to post and take care of the moderation. Moderation meaning this person reads all the comments, deletes those that violate the guidelines, and answers questions.

„In general, however, we try to erase as little as possible because we are happy when our fans discuss the topics of Europe,“ says Wozniak. For employees, this means there is also weekend duty, but not around the clock. Moreover, each employee works not only on social media, but they are also responsible for language divisions or developing editorial content. 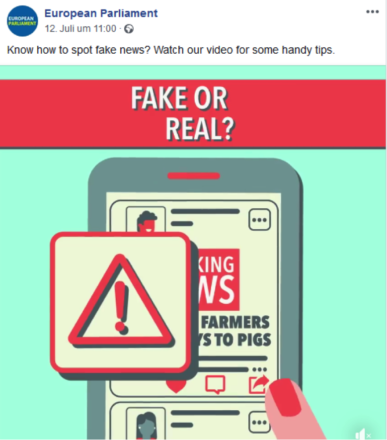 One of the biggest challenges for Wozniak as the social media coordinator is the ever-changing programming of online services and search engines. „We always have to adapt our content to the new algorithms so that we can continue to reach many people,“ she says. They are constantly trying out new formats, such as the live stream feature on Facebook that came out two years ago.

Ambassador for the European elections next year

Preparations for the 2019 European elections are currently and fully underway. „This time we especially want to inform young people,“ says Wozniak. Considering the last European elections five years ago, almost 43 percent of the 500 million eligible Europeans took part. The 2009 voter turnout rendered little change. Germany had the lowest turnout with 35.5 percent amongst 21 to 24-year-olds. First-time voters performed better with just under 40 percent.

In past elections, many significant efforts were already being pushed for first-time voters such as the YouTube campaign #storychangersEU. The idea behind this particular campaign was that young people can change a trend. Participants could go on a corresponding website and formulate a message of what should happen to the cat in the YouTube video. For the upcoming elections, young people can already express their interest on the website „This time I am voting“ and could then be trained as European election ambassadors.

Wozniak’s enthusiasm for the common European project has stayed strong over the years. She hopes she can pass some of that on to the EU Parliament’s Facebook followers. She has never regretted packing her things and going to Brussels. She says: „I am still convinced that we can only make a difference together with the other European countries.“ 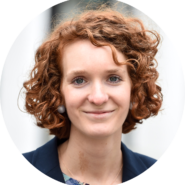