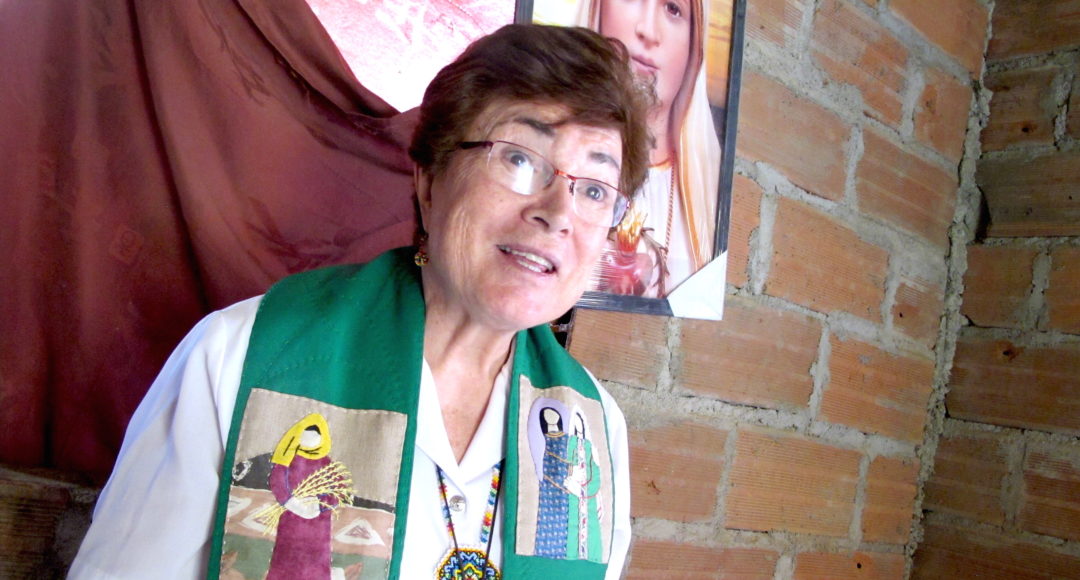 Olga Lucía Álvarez at a house mass - she fights for equal rights in the Catholic Church. Photos: Katharina Wojczenko

As a child, Olga Lucía Álvarez would play pretend procession and reenact mass services with her siblings. Despite resistance from the official church in Rome, the 77-year-old Colombian woman was ordained the first female catholic priest and bishop in Latin America.

Olga Lucía Álvarez Benjumea is not easily disturbed – not by the chickens under the altar, not by the rabbit hovering over her feet during the sermon, not by a boy’s cellphone going off, and certainly not from the bus jostling over potholes outside the door every few minutes filling the house with exhaust fumes. The grandmother of the house, 86-year-old Anita Manco, has a sore leg. Her children have invited Olga Lucía Álvarez to her home so that she can administer the anointing of the sick to their Grandmother and celebrate Holy Mass.

Álvarez is a female priest and is part of the worldwide movement Association of Roman Catholic Priests (ARCWP). In the United States in 2010, she was ordained the Roman Catholic woman priest of Latin America and a bishop in 2015. She says she will not disclose the name of the bishop who ordained her until after his death as he is still a member of the official church in Rome; the same church that chooses not to acknowledge the ordination of women priests and who has subsequently excommunicated them. In turn, women priest do not acknowledge their response, or in the words of Álvarez: “Jesus was a man and this is why women cannot represent God. How ridiculous!”

With her pink sneakers, pink backpack, white blouse and cherry-red pants, the 77-year-old resembles a school girl with determination. The simple metal cross on her chest is the only indication of her beliefs. Her approach is simple. She doesn’t need to have her own place of worship. The room in the bare-plastered house with a tin roof where grandmother Anita lives is sufficient. The family has arranged the table to be adorned with a white cloth.

This is her altar. Here she prepares the sacramental bread out of a plastic box along with the small wine bottle, the chalice and her bible. They use the grandmother’s bed and several plastic chairs for pews. In attendance are her two daughters, son, son-in-law and three grandchildren. Álvarez puts on a stole, which is colorfully embroidered with female saints. She greets everyone with hugs and kisses. Touch is just as important to her as the words.

Empowering others with the bible

When she really wants to, she has a way to preach the word of God in a relatable way. She becomes loud, then whispers, as if speaking directly to you. For this family in particular, for example, she chose the biblical passage about the healing of Simon Peter’s mother-in-law for the service. In the Aramaic language, Jesus did not simply say “Stand up!” as is written in the translation, rather “You can stand up.” You have the dignity, you have the spiritual power, you are capable – she explains. “He motivated her and he took her fear and pain away,” says Álvarez and continues: “Everything depends on us. The Spirit of God is within us – we just have to let it in, strengthen it.“

Becoming aware of your own dignity and acting upon it yourself: this has been a lesson that Olga Lucía Álvarez Benjumea has already preached to many people in difficult life moments, even when she was not a priestess. Growing up in a village in Departamento Antioquia, she became familiar with Colombia’s social problems at an early age. In this area, there were several illegal mines and over the decades, repeated disappearances and massacres plagued the poor population.

Her mother was a deeply religious woman. She passed on her Catholic faith to her children. Of the six siblings, two became priests and one priestess. Already as children, they played church at home, holding masses and processions. The altars were decorated by their mother with newspapers. The siblings took turns playing the pastor. „My mother never said: Olga is not allowed to do that,“ remembers Álvarez.

Álvarez became a Catholic lay missionary, working with Afro-Colombians and Indians in places accessible only by boat or donkey. She also worked with people in the slums of big cities. She listened to them, talked to them about the gospel, and tried to find practical solutions to their problems. She built workshops, for example, and encouraged women to study.

As a priestess, she continues to go where she is needed. She works with women released from prison who have no one to talk to as well as with prostitutes. She also visits families who invite her.

The first women priests were ordained on a ship near Passau, Germany

Women priests got their start during the international women priests movement in Austria. The founder is the former Benedictine and teacher Christine Mayr-Lumetzberger. „In the 70s, we the nuns expected the offices to open up,“ says the now bishop. However, Pope John Paul II declared the question pertaining to the ordination of women to be closed. This is why 20 years ago, Mayr-Lumetzberger developed a training program for priestesses. In 2002, the bishop and Argentinean liberation theologian Romulo Braschii, who had been excommunicated by the official church, inaugurated the first seven priestesses on a ship on the Danube near Lower Bavarian Passau.

Today there are about 300 Roman Catholic women priests worldwide. The most widespread movement is in North America. In Latin America, there are currently ten: nine Colombians, one Venezuelan, plus seven candidates. There are about 20 women priests in Austria and Germany. Most of the women work in secrecy mainly because of an additional role within church organizations. The State Treaty with the Church, known as the Concordat, is to blame.

If what these women were doing was exposed, their job would be at stake. Those priests who work with the women or allow them to officiate in their churches also want to remain anonymous. „Thanks to word-of-mouth, they are able to spend a lot of their time at baptisms, weddings, worship and pastoral care,“ says Mayr-Lumetzberger.

What these women worldwide have in common is a family who stands behind them and their financially independence. This is important because the priestesses do not earn anything. Álvarez, too, only decided to make this step once she was retired. She does not have a partner nor children. Marriage, partnership, divorce or homosexuality, however, would technically not be an obstacle to be ordained as a female priest.

„I have read the Gospel and felt liberated. I feel obliged to liberate others,“ explains Alvarez.  She did not want to convert. „I have never gone through the slums and felt the need to spray holy water around me. I have lived, rather, by my faith.“ Everything else, such as the church’s crimes against the indigenous people during the colonial era, she does not reconcile.

Above all, she worked for years alongside Bishop Gerardo Valencia Cano and became his secretary. Valencia was Bishop of Buenaventura, which is today an area of ​​violence and poverty on the Pacific coast with mostly an Afro-Colombian population. He deliberately promoted female missionaries and allowed them to take on these priestly duties. Valencia was a passionate exponent of liberation theology, which Álvarez also felt inherently part of.

Triggered by social injustice, this arm of theology developed in the 1960s in several Latin American countries. The Liberation Theologians interpreted the Bible out of the experience of the poor. They wanted to help them to free themselves from exploitation and oppression – instead of waiting for salvation.

For the poor, against church resistance

Liberation theologians challenged dictatorial regimes, the Roman Catholic Church, (which often cooperated with these regimes) and those who were in power or the ones who mistook the movement for socialist ideas. Priests were repeatedly murdered, also in Colombia. Bishop Valencia died under dubious circumstances in a plane crash. The Liberation Theology office in Bogotá, where Álvarez worked, has been repeatedly attacked.

At the same time, Latin American liberation theology had far-reaching consequences for the Catholic Church worldwide. Álvarez experienced this in 1968 in Medellín when she was secretary of the General Assembly of Latin American Bishops. The bishops denounced social injustices and, with the Pope’s approval, introduced the so-called option for the poor as a guideline of the church. That is to say, that there would be a special party designed to embrace the poor – a thought that Pope Francis took up again.

Álvarez took part in a minority movement which developed as a resistance to the church hierarchy which ultimately changed the church worldwide. She hopes the same for the women’s priest movement. In most Protestant, Anglican and Old Catholic churches, and other Christian communities, ordination of women is allowed. Converting is out of the question for Álvarez, because her goal is nothing less than the revolutionizing the Roman Catholic Church.

Bishops in the Vatican continue to reject the ordination of women. Canon law allows consecration only to a baptized man. Theologically, this is controversial. Advocates of women’s ordination point to Mary and Mary Magdalene, whom the risen Jesus Christ asked first to spread the Gospel around the world. The retired history and theology professor Dorothy Irvin of the University of Tübingen, found evidence in excavations from the first eight centuries after Christ that women were active as Christian priestesses.

In 2016, Pope Francis set up a commission on the issue of the women’s consecration ­– the lowest of the three consecration levels (deacon, priest, bishop), which until now have only been reserved for men. However, he dampened the hope for change: The Commission should solely examine the historical role of deaconesses in the early church. The result is still pending. „I like Francis very much,“ says Olga Lucía Álvarez, „but he is like that friend who tells you many beautiful things, but never talks about marriage.“

In light of his visit to Colombia in 2017, she wrote an open letter to the Pope. She offered him her services and asked him to speak with her. Up till today, she has still not received an answer. „But since then, I have regularly visitors hits from the Vatican to my website,“ says Alvarez. She is convinced: „Sooner or later it will come. We have laid the foundation.” The faithful will have always accepted her as a priestess. Or in the words of Grandma Anita: „You can learn everything – even as a woman!“ 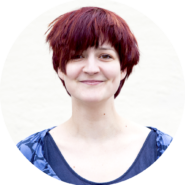