A Big Girl
Portrait of a Chilean street artist

25-year-old Magdalena Cañas wants to shake people out of their daily grind with her street art murals. For her, art is a social responsibility that should make others feel strong and confident, even spark a resistance. Her favourite subject is a giant girl.

The pungent smell from colour lingers in the air. A young woman is standing on a tall wooden ladder painting the wall of a grey house with a fine pointed brush. She has her hair pulled into two braids and is wearing orange leggings with an apron tied around the front. A baseball cap protects her face from the sun that is shining strong in a cloudless sky. With the stroke of her brush, the shape of a sleeping girl with two red pig tails begins to take form; a green blanket is strewn over half her body. “This is a personality that I have been working with for awhile and that I have also painted in various places around Valparaíso. A giant girl. Honest, genuine, humble.”

The young artist takes lifeless buildings and transforms them into fantasy worlds full of colour. Her name is Magdalena Cañas and she is 25 years old. Her pseudonym is MAIDA K and she is one of the few women in the Chilean street art scene. She was born in Curacaví, a city located on the outskirts of the Santiago Metropolitan Region – Chile’s capital. The first time she held a spray can was when she was 13 years old. Together with the darkness of the night as their cover, her and her friends from the hip hop scene made their way through the streets tagging the walls. With her first real boyfriend she learned the ins and outs of spraying graffiti.

“I started with doodling, not being able to really paint. After awhile, I developed my own style and my own technique,” she recalls. She says her style is a mix between illustration and realism. Her aesthetic role models, as Magdalena Cañas calls them, are the Italian artist ZED1, the French Seth and the Brazilian Alex Senna.

Moreover, she has come to admire two people particularly for the way in which they live their lives and subsequently give her strength for her own – Inti Castro and Mono Gonzales. Both are famous Chilean street artists that portray political and social topics in their artwork. There are also women that inspire her, like ANIS and ACB who are also artists from Chile. ANIS has also painted in Germany at the Fusion Festival.

By definition, street art is known as the design of open spaces. The techniques behind street art and graffiti often overlap each other, making the two terms difficult to differentiate. The term street art is broader, meaning that it doesn’t necessarily only mean painting a street mural. Street art can be a sculpture or a pole wrapped in a knitted cocoon. The most well-known street artist is Banksy who keeps his actual identity a secret. The message that is often being depicted with this style of art is against consumerism, capitalism, and the so-called public order. However, most artists refrain from offering such a deliberate message and go with “the medium is the message” motto.

Magdalena Cañas says herself that illegally spraying has made her braver and more self-confident. “That is why there are so few women in the scene because so many women are insecure. I was always a bit reckless,” she says and laughs. “It’s important for me that I know the roots of street art. I’m not one of those academic artists. I know the streets.” For her, working in public spaces is already a way to show political opposition or protest.

Nonetheless, she first decided to study visual arts at Diego Portales University in Santiago. It was during her studies that she was hit with an existential crisis: “What they were teaching at the universities was for galleries, from artists for artists. I showed my work to my parents and they didn’t understand anything. Because of this, there was a barrier between me as an artist and the observers. I didn’t see the meaning of art anymore.” As a result, she quit her studies and moreover her father became gravely ill. She started watercolour painting with him and noticed how the painting did him well. Soon thereafter he died. “If I had started painting with him earlier, maybe he would have lived longer,” she said in retrospect. Art slowly started to have meaning again for Magdalena Cañas.

After the death of her father, she wanted a new start and moved to the port city of Valparaíso with her boyfriend. As an artist, she was also experiencing a renewal of self. Valparaíso is considered the art and cultural metropole of Chile. Here you can find the artworks of street artists from all over the world. The city is located on the Pacific coast and is known for its many colourful houses that seem to grip its steep hills.

“Here I feel like going out every day and painting”

In 2004, UNESCO added the historical city centre to the World Heritage List. Musicians, writers, and artists from all over the world bustle about the streets of Valparaíso. When asked if the city particularly inspired MAIDA K: “I think being surrounded by art – colours, shapes, architecture – inspires every artist,” she explains. “I never felt this way in Santiago as I do in Valparaíso. Here I feel like going out every day and painting. 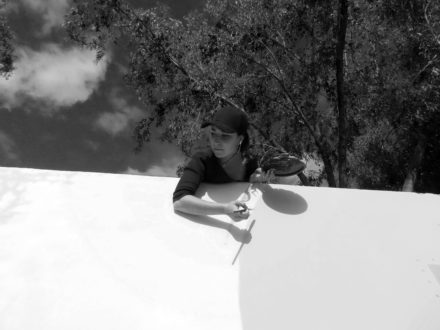 The first sizeable mural MAIDA K painted was in her neighbourhood in Valparaíso with a “Minga” – a traditional form of collective collaboration. All the neighbours picked up garbage together and cleaned up the area. MAIDA K put together a mural with a mermaid as to capture the identity of the port city. “It was great to see the positive reaction of the neighbours. I was touched. I again discovered the meaning of my work as an artist, which was on the streets.”

Consequently, she began viewing her art not as a hobby, but as a job. That was last December. In Chile, it isn’t easy to work as a self-employed artist and live from the earnings. “You need a lot of self-discipline and physical strength because working outside up on a ladder, on a wall, is tiring. I’ve given up so many other hobbies so I can dedicate myself to the art. Dancing, for example. I always have to challenge myself.”

Sometimes Magdalena Cañas takes on a commissioned work. Home owners or restaurants will call her to spruce up their buildings. “Commissioned work restricts me a bit of course. The owners often already have a specific idea of what they want from a mural. Although many of them let me work freely,” she says. The commissioned work allows her to finance the passion of her livelihood. In contrast to gallery work, her paintings are seen out in the open where people can react to them and that is exactly what she likes about street art: the effect her work has on people.

This was the case at upper end of the stairs “Héctor Calvo”. The owner wanted the grey wall of her house to be redesigned. Valparaíso consists of 46 hills, which is why the city is full of stairs peppered with artworks. The stairs “Héctor Calvo” are made up of 185 steps that lead up to Cerro Bellavista. It is in this neighbourhood that you will also find the house of the famous Chilean poet Pablo Nerudo who won the 1971 Nobel Prize in Literature. The stairwell is adorned with mosaic tiles that recite the poems of Neruda. At night, the stairs in Valparaíso transform into meeting points for young people to drink, smoke and otherwise enjoy themselves which often turns into conflicts with the neighbours.

La niña gigante, the big girl, is a motive which MAIDA K has already painted at different locations.

“There’s a lot of partying on these stairs and a lot of chaos at night that bothers the people who live here. The painting is a reminder that children are sleeping here and that people live here and are at home,” explains the artist in a soft voice. The mural she just painted is called “niña gigante” – giant girl. The girl is sleeping on her side with her head resting on the right hand. A cat snoozes at her feet. Sitting on her legs is an open book, as if reading it had put her to sleep. The mural is reminiscent to Manga: edgy in its form and the girl’s joints are robotic-looking. “The girl is based off Alice in Wonderland. I play with the transition between the magical and the real world. How much magic is hidden in the real world when we learn how to recognise it? Only a few have the capability to live in both worlds,” explains Magdalena Cañas.

The giant girl in series

The girl is supposed to remind grown-up people what it’s like to be a child. To complete such a piece, she needs about a week. She first draws a sketch by hand, scans it and saves it as a template on her phone. She generally works with spray cans, paint brushes and paint roll brushes. “I don’t improvise; on the contrary, I am very meticulous and plan out every detail,” she says. The giant girl is a series by MAIDA K that she paints in different locations throughout Valparaíso. In a different location, she painted the girl inspecting an insect with a magnifying glass. The idea behind the painting is that it should invoke people to observe nature. Whether the girl is a self-portrait or not, Magdalena Cañas considers it with a laugh: “I haven’t thought about that, but I think that an artist is always portraying themselves because the art is expression of their own soul.”

Art is said to be an expression of society’s soul. “We live in a sick system and art heals us. It reminds us that we are alive. We live in a time where the actions of people become automated in the name of productivity. That’s why art is a resistance for me. It is a tool of self-empowerment and freedom. It is the voice that has been tried to be silenced.”

In that sense, she believes that many of the murals in Chile have a political background. Artists expressed themselves in their opposition against the regime of the military dictator Pinochet at the time. “The art murals in Latin America are based on social and political fights in demanding rights.” Since the end of the dictatorship in in Chile in 1990, art in open spaces has experienced an exceptional boom that in time is no longer being fought against, but rather promoted. “I myself am still searching for my own political message that I would like to express. That is part of the way to self-empowerment,” says Magdalena Cañas thoughtfully.

Her second life pillar is children – and youth work – from a financial side and also what she is personally concerned in regard to her own beliefs. She gives art mural courses in a cultural centre as well as in schools. In the course, the youth learn how to put artwork on a wall step by step from the draft to the technique. As a teacher, MAIDA K looks different, grown-up. She wears a wool dress with high heels and sunglasses pushed on top of her head. For her, there is a responsibility to the observer, the public, and the society that art gives: “I want to share something, leave something behind. I make art not for myself, but for others. Young people are motivated and have a lot of dreams. I want them to come away being strong and confident.” For this reason, it is her goal is to offer more art mural courses in the future for the youth all across Latin America. 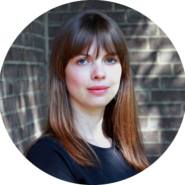 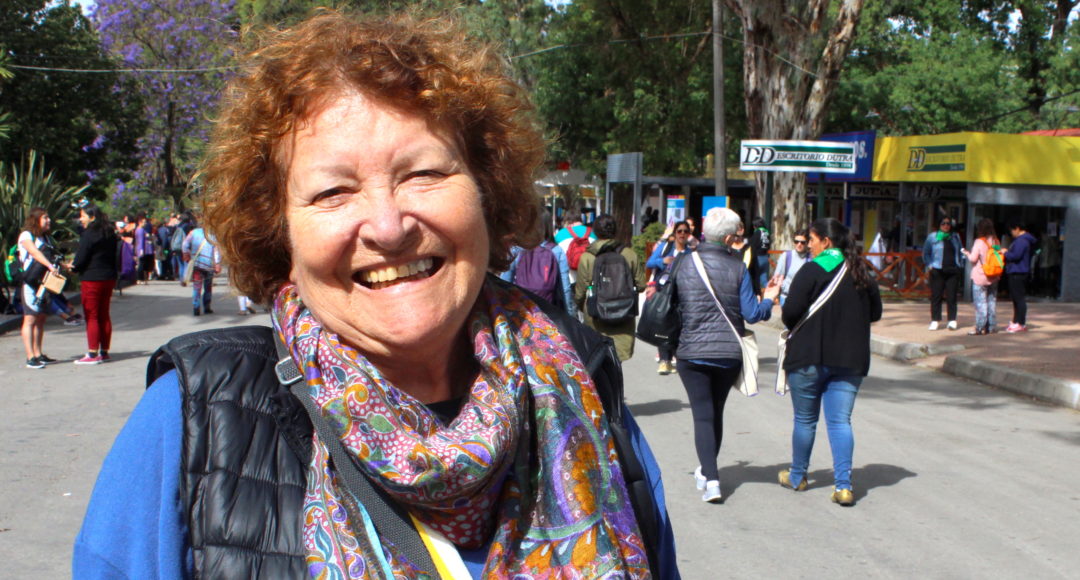